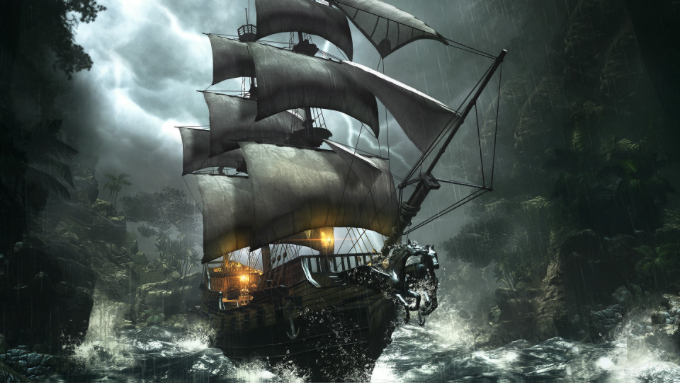 Always consult a lawyer for legal advice on copywrite law and protecting your ideas and material.

There's a good reason we use a pirate ship as the featured image in this article. If you want to know the ins and outs of protecting your ideas – this article may be for you.

The film industry is all about networking, building relationships, and to some extent who you know. Not to say "connections" are any substitute for skill or talent either - you'll need plenty of that as well in order to succeed in the film business.

Part of this game can be attending industry events, film festivals or film markets, and taking the time out of your busy day to meetup with contacts for a coffee or a beer to discuss projects, catch up on industry trends, and maybe discuss collaborating together on something new – as many projects don't tend to happen single-handedly.

For me personally I hold at least one or more meeting like this every month ranging in intention from looking for scripts to produce, looking for producing partners, or just getting to know someone completely new I might decide to work with one day and building up that rapport. It's always a great idea to keep building up your network.

One thing that's bound to come up when meeting new people or even old colleagues is the question "what are you working on these days"? This is where inadvertently you may be sharing your idea(s) with either a complete stranger or possibly someone you've known for years. You could also end up discussing ideas you have brewing for a film idea that you are interested to pursue. Maybe you have a script already for it or maybe you don't - but as Iwrote in one of my previous articles "preparing for TIFF" be very careful who you share your ideas with – and truly evaluate the purpose of doing so. Are you simply trying to inflate your ego? Resist that. Are you looking for feedback on it or testing waters to see if someone else thinks it's a good idea? Are you pitching your script? Do it smartly.

So here's my story and why I decided to write this article and share it with you; imagine to my surprise waking up one day and seeing the announcement of a new film that seemed identical to a full story idea I shared with a colleague over a coffee less than a year ago.

For some people depending on what stage you were at with the project or not, this would be absolutely devastating. Imagine how much time, effort and resources can go into transforming an idea into a script and the work which follows to fruther refine that script. Some people spend months on this, some years, and some much longer.

So back to my situation. I had shared in full detail beginning to end this idea I had for doing a film. It was not half baked, it was a simple story and I should mention it was for a short film, but I discussed character interaction, the premise and background, location, and how it ended with a twist/scare. I had the script already written but did not share it in this case.

After the meeting the colleague liked the idea so much he offered to write it for me and even knew a young cast member that would be sutiable but I indicated that 1) I already had the script and 2) I wanted to cast my son for it as I was slowly getting him into the industry of film and thought this would be a great way. A few days after meeting I received a written script in my email that I did not ask for and reiterated (this time in writing) that I was going to pursue it on my end, use my own script, and cast my son to get him slowly exposed into the realm of the film world.

The actual script I wrote was shared with at least a couple of other colleagues prior to all this happening, as we had been working closely on developing a series of themed material for a distributor who was interested in genre material I had been producing.

When I saw the announcement of the new film (practically with same title) well to be honest my jaw naturally hit the floor. Half of me is saying, "well it was bound to happen" while the other half is just distrought that a collegue (not a shady producer wearing a green flannel patterned suit) was the one that did this. I decided to reach out to them to ask why of all ideas they decided to pursue the one I had shared and the response was that I didn't like the version of the script they had written and that the film could be done reasonably easily. The discussion continued a little but in the end their stance was this was a petty issue and that there is room for competition.

I humbly replied that to many regards I could actually agree with some of this but it still doesn't change the basic principle of a colleague I've known for many years taking and running with the idea I had shared with them.

Should you really be worried about someone stealing your idea?

I'd ask you at what stage is your "idea"? Do you care if someone takes your idea and executes it and what's at stake if it's taken? Have you already spent a lot of time, money and resources developing your idea into a fully fledged script or is this an idea written on a napkin?

These are all things you need to ask yourself and I think the answer of whether or not you need to be worried is completely up to you. I mean at some point you are going to have to reveal your idea to others if you are looking at attaching producers, talent, crew, etc.. so to some extent it's just a matter of time but the bottom line is if you share your idea regardless of what stage it's at if someone takes it from you intentionally and runs with it – 100% it sucks big time ass.

So should you be worried? I guess only if you have something to worry about if that makes sense.

How can you better protect yourself?

First let's be realistic. An idea is just an idea and the fact is that copyright law does not protect ideas. Ideas are as free as the air we breathe. If you share an idea with someone and they decide to use it, you probably won't be happy about it - but you might also be a little more careful how you share your ideas next time around.

The only advise I have to protect yourself is first not to shoot off any ideas or concepts unless you truly don't care about the idea at all. Make sure your idea has already taken a form of a script and that it is not just an idea as "free as the air". Avoid verbal communication about ideas or scripts. If you want feedback on your idea then have it in form of a script and send it electronically. Use contracts or NDA's that are signed and returned first before sending out your script although for shorts, its somewhat less typical.

While this article was more geared to discussion around protecting "ideas" for more information on protecting your finished screenplays visit these fine resources: